“…what sell-off plan is Mr. Wall hiding?” Broten asked reporters yesterday, presumably not rhetorically, and in hopes someone would give him the answer. Anyone.

Do you remember when this narrative backfired spectacularly on the Saskatchewan NDP in 2007?

Hey, don’t take it from me. This Littlest Hobo/Lambchop-hybrid campaign was so bad…

Yes, this is a real picture from an actual advertising campaign the 2007 Sask NDP thought you’d totally love and relate to.

…that it’s been studied by political science students all over Canada.

‘Maybe they’re just to stupid to understand what we were trying to say’ the 2011 Sask NDP war room must have thought to themselves, because I know they trotted the same crap, different pile, out again then too. I just can’t find it right now because my kid has to be at preschool in a half hour.

Anyway, I am gobsmacked, for like the umpteenth time since this campaign officially started a few short weeks ago, that Broten’s NDP figured that it didn’t work in 2007, it definitely didn’t work in 2011 (nothing did, because Lingenfelter), so it’s GOT TO work in 2016.

The reality is that if you if make the same accusation for almost a decade (that Wall has some kind of secret agenda) and it doesn’t come true, who loses?

Reminds me of another wolf analogy, but instead of me summarizing it, I’ll let British author Harrison Weir explain in this excerpt from his book, The Fables of Aesop; With Instructive Applications, which he wrote in 1859 (so this is not exactly fresh, radical theory, either): 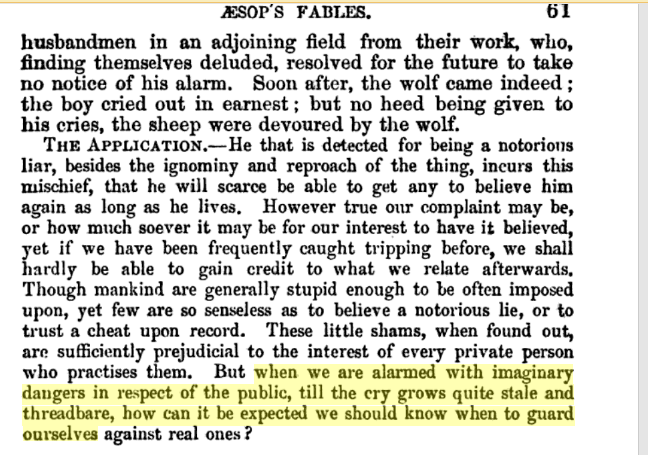 So the Sask NDP aren’t the only ones losing out with this repetitive, alarmist nonsense.