Saskatchewan is definitely not getting $570mil in refunded equalization. We’re not getting anything, in fact.

However, the federal government will provide advance fiscal stabilization payments of $251.4 million to Alberta, and $31.7 million to Newfoundland and Labrador with respect to 2015–16.

Apparently we knew this already, though, and Wall is on the record stating we weren’t entitled to any payment. There’s a formula, and we weren’t broke enough.

All I know for sure is Wall/we wanted extra money and/or support, and we didn’t get it.

There was no change to the equalization formula, meaning we’ll continue to prop up Eastern Canada in 2016-17. 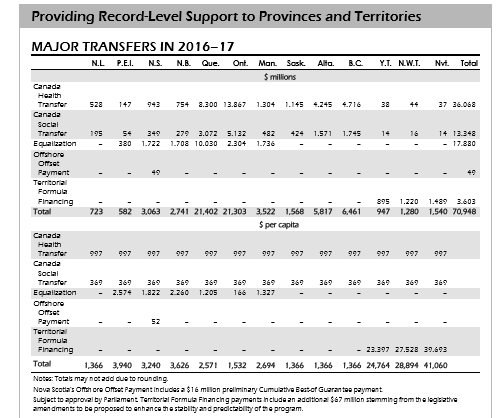 EI benefits were extended by five weeks in Northern Saskatchewan and Saskatoon, but nowhere else in Saskatchewan. Northern and Southern Alberta qualify, however, as does Calgary. 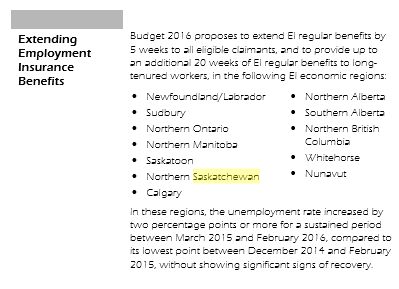 This is a massive smack in the face of unemployed oil workers living in places like Kindersley, Estevan and Weyburn, and it makes zero sense to me. Only 3 per cent of the population of Canada lives in Saskatchewan, so why cut out half of them?

Saskatchewan is going to receive $29mil over three years for 50 percent of the cost of public transport projects. 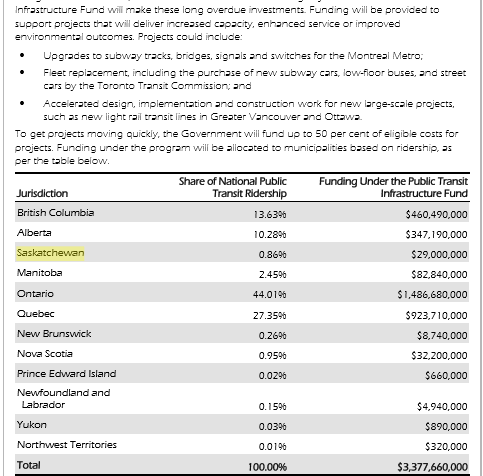 So for Saskatoon and Regina, it looks like that’s going to mean some new buses, and in Saskatoon alone, maybe some bridge maintenance?

Public transport is part of a bigger announcement regarding municipal infrastructure. 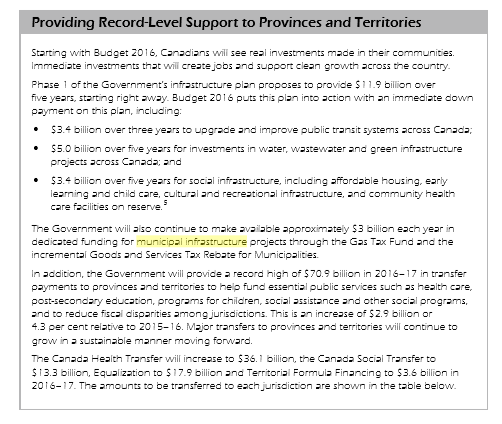 What does $11.9 billion over five years mean for Saskatchewan? I have no idea, but again, based on the population premise, it doesn’t work out to much, especially if that number includes transit (which it does).

$41.5 million to support the rehabilitation and modernization of select Agriculture and Agri-Food Canada and Canadian Food Inspection Agency research stations, including those in Saskatchewan. 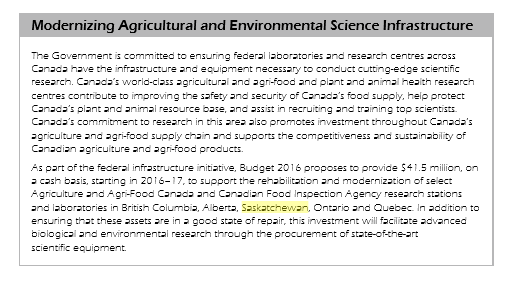 We have one Agri-Food Research and Development Centre at the U of S, which in turn manages three field sites Melfort, Scott Research Farm, and in Outlook; and one in Swift Current, so sounds like they’re going to get spiffed up.

And that more or less it for agriculture.

This one is interesting:

No idea who the “well-established company” is in Saskatchewan developing “revolutionary crop treatment technology”, but I’m guessing that will be revealed in a secondary site announcement. Seems positive though.

Budget 2016 proposes to provide $25 million over five years, beginning in 2016–17, to support economic development for the Métis Nation in Canada, including in Saskatchewan.

Here’s hoping Saskatchewan’s Metis Nation can iron out its internal warfare in order to properly access this funding, and then do something positive with it.

$2.6 billion was their original campaign commitment, so on the surface this seems good – BUT, the fine print says that the last 30 per cent won’t be delivered until Justin Trudeau gets re-elected.

Overall, the federal budget commits $8.4 billion in new investments for First Nations and Indigenous peoples and communities. About $3.3 billion of that won’t flow until 2019 and 2020.

Perry Bellegarde, so far, is diplomatic about the whole thing. He says the 2016 federal budget “takes important steps” and/or is “an important first step”. These feel like two different sentiments, but either way we’re moving forward, and that’s good.

The Regina RCMP Depot training facility looks like it’s going to get a facelift.

Look, if you’re feeling underwhelmed, it’s because today’s federal budget was indeed underwhelming for Saskatchewan. Beyond what we’re entitled to on a per capita basis, we got nada. Our oil industry, or lack thereof, has been left high and dry – there will be no oil well cleanup initiative, no specific consideration for our financial status or economic future.

Some are opining that this is the direct result of Brad Wall’s sometimes combative relationship with the Liberal government. It’s likely not – I’m not sure that this federal government actually cares enough about Wall or Saskatchewan to put that much effort into a snub.