I love Skip the Dishes. Use(d) it all the time.

Restaurants have a love/hate relationship with Skip. Those that love it claim it has drastically increased their take-out business.

Others aren’t so thrilled, stating that they’re serving the same customers they did before, but losing the 15 per cent (often their profit margin) to Skip they would have retained had the customer just picked up the phone.

Skip the Dishes, a private business, has exploded since it launched in 2013 and the 4 young men (early articles state there were 12) who took the risk to make their vision come to life should be, and often are, commended. I’m guessing their salaries reward them nicely also.

According to Manitoba Tech Accelerator, a network of venture capitalists, Skip the Dishes is on track to continue to make good coin:

I’ve been super busy over the last week so am late to this party, but I’ll share my thoughts anyway.

Here are 7 Reasons Giving 3 Million Saskatchewan Dollars to Skip the Dishes Was a Terrible Idea.

1. Saskatchewan is busted-ass broke. While delivery of the potentially most-anticipated budget in history is still a full month away, health regions and school divisions are getting ready to bend over and hand the government the Vaseline. Therefore, giving any private business three dollars of taxpayers’ money, especially under vague, apparently made-up terms, is a Terrible Idea – nevermind three million. Nevermind the ethics – even just the optics should make anyone with half a shred of political acumen run screaming for the nearest exit.

2. The potential for conflict of interest is huge. While the Order in Council devotes an entire section to the assurance that taxpayers’ money will not be used to hire any of the Skip team’s immediate family members – what about the immediate families of the Saskatchewan Cabinet Ministers who signed off on this deal, or other members of Executive Council (ie Chiefs of Staff) who were privy to it?

What about the immediate families of the Sask Party’s staff, or board of directors, one of whom appears to have a connection to at least three of the four founders?

In Saskatchewan, somebody with a connection to the source of this money – Cabinet Ministers – is going to benefit, because this province is too small for that not to happen. If those connections don’t exist already, despite rampant speculation that they do, they will be made over the next three years, or the life of this contract.

3. The majority of this money is not for tech jobs. When asked why he was cool with this taxpayer-funded investment in the Simair brothers’ private company, Premier Brad Wall said:

Well, I hate to split hairs here (no I don’t), but according the Order in Council, at least half, possibly two-thirds of “these” jobs  are not what you think of when you think “tech-sector jobs”:

According to Skip the Dishes’ careers page, the job description for a ‘Partnership Specialist is: 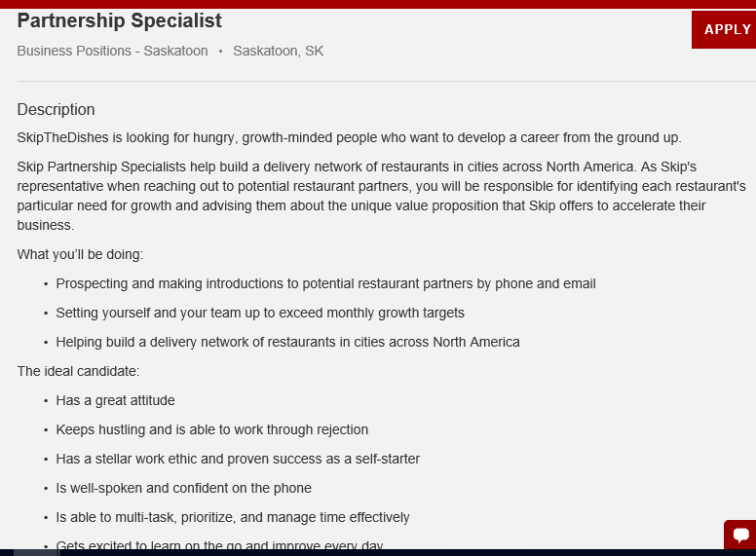 Cold-calling restaurants for Skip the Dishes may be a job in the “tech-sector”, in that you’re hawking a tech-product, but it’s absolutely not a tech-job.

When you heard Wall defend this deal, did you think, ‘oh, he must be talking about cold-call sales’? No, you didn’t. You though hardware, software, database and programming jobs.

Are salespeople valuable contributors to the provincial workforce? Absofreakinglutely, but a call-centre (even a call-centre packed full of hipsters) is not diversifying the Saskatchewan economy, and that’s where at least $1.5 million, maybe $2 million of your money, is going.

So because I believe Brad Wall is a person of integrity, I’m going to assume he didn’t read that part of the Order in Council, when he looked reporters in the eye and talked about how this cash would “diversify the economy” via “these tech-sector jobs”.

There was also this requirement:

Now you’re just f**king with us, right? In what world are cold-call sales/call centre jobs “high demand”? And tech jobs – there’s a veritable glut of those across Canada. If you have mad skillz in IT, you’re sitting back and counting the job offers.

Does Skip have a “high-demand” for IT employees?

If so, that’s the taxpayer’s problem how? Corporate welfare is deplorable enough when it’s dubbed a ‘bailout’ – what on earth do we call it when it’s being handed to booming businesses facing the challenges of growth?

But, IT recruitment apparently isn’t Skip’s problem either.

“The calibre of talent we’ve been able to attract to our office has been world-class and, with our plan to expand to another 100 markets in North America, our entire team’s excited to be building the future of on-demand food delivery right here in Manitoba,” said SkipTheDishes president/co-founder Joshua Simair to the Winnipeg Sun, four months ago.

Okay, he was talking about Winnipeg (where the Selinger government had just written him a cheque for $5.5 million to recruit all the same talent Skip is purportedly recruiting in Saskatchewan) but if you’re in IT and willing to move to the ‘Peg, I’m pretty sure Saskatoon isn’t much further down your list.

I’m not even going to get into the huge issue with Simair telling Winnipeg media he planned on “building the future” of his company in Manitoba, four months prior to shaking hands on a deal in Saskatchewan

4. This money is also not necessarily for permanent jobs, according to the Order in Council:

2080 hours equals 40 hours of work for 52 weeks, or one year. The End Date of the Agreement is April 30, 2020 – 1 year after Skip has to hire the last employee on the publicly-funded dime. There are no terms built into the agreement beyond that – 300 hires on a one-year-term basis over four years. On this day, four years from now, there could be precisely zero of the 300 employees hired and trained with provincial funding still working, and there’s no recourse whatsoever.

Or, of course, by then the company may have gone public, or have been bought out and moved pretty much anywhere, in which case I’m sure the taxpayers will be all “You’re welcome Skip founders, happy we could help make you really wealthy by investing in your company for absolutely no fixed return. We love being the stupidest venture capitalists ever in the history of investing.”

5. The money could be going to a paid internship program. Skip the Dishes’ Graduate Rotation Program “gives high performing new grads the opportunity to gain comprehensive knowledge of the interdepartmental business functions at SkipTheDishes…Upon completion of this paid rotation program, there will be a 360༠ evaluation and opportunity for full time placement at Skip.”

In other words, you audition for a year and then Skip will decide if they want to keep you.

It is a paid position, and there are 6, 12 and 18 month terms available, the latter two of which would qualify for this funding.

I asked the Ministry of the Economy if the funds were going to this program and the response was that they knew “nothing” about it.

The program would likely have the Ministry of the Economy’s blessing, however, because they had criteria!

Just to clarify, the OBCM process was just launched last year as a way in which to ensure the Ministry engaged “under-represented groups in the Saskatchewan workforce”, such as youth, seniors, people with disabilities, and those living in poverty.

Apparently Skip meets three of the OBCM’s deliverables, including training its people to have the “skills and attitudes to be successful in the workplace”, and for “career movement” and “career change”.

Pretty sure I filled out that questionnaire in the guidance counselor’s office in high school, but whatever. Sure.

Anyway, yeah. The money could be used to audition interns.

6. Or, to buy land. Seriously. The Order in Council allows for the purchase, with permission from the provincial government, of “land, buildings, fixtures and equipment”. Upon the End Date of the Agreement, Skip and the government have the option to enter into a new contract related to selling or managing these assets.

7. Because the government categorically did not tell us about the $3 million investment in Skip the Dishes before the election, but certainly used the company’s growth to pump their strong-economy election message.

On March 4, 2016, the provincial government issued a release entitled Saskatoon’s SkipTheDishes Set to Expand Training and Employment, talking about the 300 new jobs, but making no reference to any public-funding.

The following day the Star Phoenix ran a story stating “(Skip) is eligible for up to $10,000 per job for up to 300 positions, a Ministry of the Economy spokeswoman said in an emailed statement”.

An emailed statement which the paper had to ask for.

That vague admission about funding was not voluntary information from the government – nor was it accurate, as it cited the funds as coming from the wrong program, which was later retracted.

In his scrum last week, Brad Wall cited the Star Phoenix story as the reason reporters, or by extension the by-then outraged general public, shouldn’t be “surprised” about this money.

First of all, there is no such thing as “you had your chance” when it comes to government transparency and accountability via media.

Secondly, I would love someone from executive council to try and tell me the glaring, $3 million omission in the pre-writ media release was unintentional.

Last week, since none of the Cabinet Ministers who agreed to this deal were available to actually talk about it publicly, one of the government’s deputy ministers described the public funding of Skip the Dishes as a “unique offering”.

It was uniquely bad idea, driven by bad policy, with no demonstrable foresight into how the public would react, or why – and I’m talking to provincial government and Skip the Dishes.

Because they really did not help themselves either.

“When the original announcement was made, before the CBC article went out about $3 million going to Skip, there was a lot of positivity that people saw this as jobs are being created in the province,” Josh Simair, Skip the Dishes CEO told CBC.

Allow me to rephrase that for you: ‘everyone thought it was awesome until all of the details, including the ones conveniently glossed over, of the $3 million going to Skip were made public’.

He said the money will “level up Saskatchewanians to work at a world class level.” Because this is a video game, and the kids are hip to cold-calling sales jobs.

“…we’ve been really blessed by both Saskatchewan and Manitoba helping us along the way because it’s not easy to be growing 10 to 20 per cent a month.”

Blessed by using the free market to buy into your product Josh? Or blessed by government handouts because you’re super popular.

“…it’s a meaningful service, he said. “It’s like a single dad or a group of nursing students that want an extra 45 minutes while their food arrives,” he said.”

“It takes a village to raise a startup.” The ultimate, entitled, twentysomething CEO-mic drop.

– but just two provinces were stupid enough to pay them to do it. And one of those governments, a NDP government which probably though they were just nationalizing it, just got thrown out by their ear.

So weird that this is a surprise to Saskatchewan now.

3 thoughts on ““It takes a village (of Saskatchewan taxpayers) to raise a startup”: 7 Reasons Giving $3Mil to Skip the Dishes Was a Terrible Idea.”