Pawing through back issues of the PA Herald at a relative’s house, I nearly choked when I saw this in the June 27, 2016 edition: 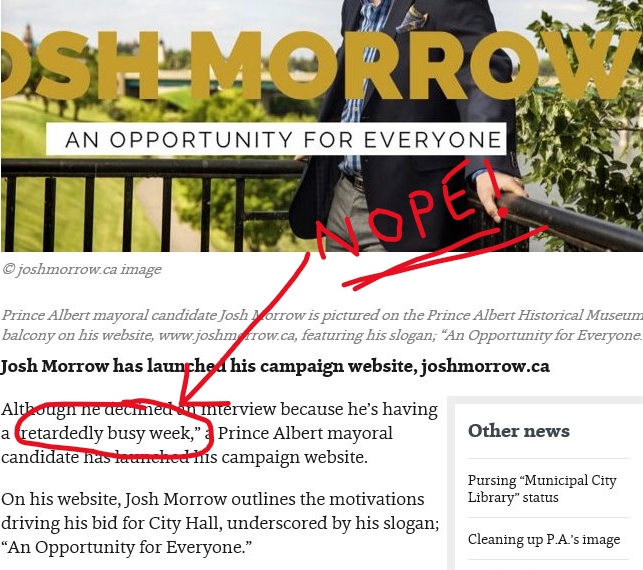 I was tempted to brush it off as a flippant mistake, from a guy who clearly has absolutely zero media training, but hello, he’s running for mayor. Demonstrating an understanding of the gravitas of the job you’re applying for is vital, and every word out of your mouth counts. Frankly, the r-word sucks – especially when used by those promoting themselves as leaders. So no free pass today, sorry Josh.

I know I know, it’s just a word – except it’s not. It carries a lot of weight, regardless of what noun it’s being used to describe (and let’s be clear, Josh was using it as an adjective, not a verb). It’s meaning has transitioned from impartial, once used to describe a group of marginalized individuals in our society, to degrading, even when used in its original context.

Anyway, I hope Josh saw himself quoted in the paper and realized two things: 1) the media’s job is not to choose only words that define you positively; 2) this was his one – loads of other candidates in loads of other cities would have been excoriated for this, as will he if it happens again, especially once the lazy, hazy days of summer are over.

PS – not to pile on, but could somebody nudge Josh and advise him that he’s running for mayor in a city where over 50 per cent of the population is of indigenous background? This literally may be the whitest website ever.

In fact, the only mention of Prince Albert’s indigenous residents is under… Tourism.

“Josh…will work diligently to promote and showcase local talents and tourism in a positive way challenge the unfortunate stigma the city has developed.”

“Our city is rich in history including our Metis and First Nations communities and has many things to offer such as lakes, golf courses, agriculture and wilderness areas.”

Dude. Rethink this. All of this.

Prince Albert, you so desperately need indigenous peoples on your City Council. I (might literally) pray those candidates come forward before fall.