So Husky has refused to speak to media and/or provide an actual human being to share any real meaningful information on the Saskatchewan oil spill, but they’re going to show up at a gas station tomorrow to do just that? 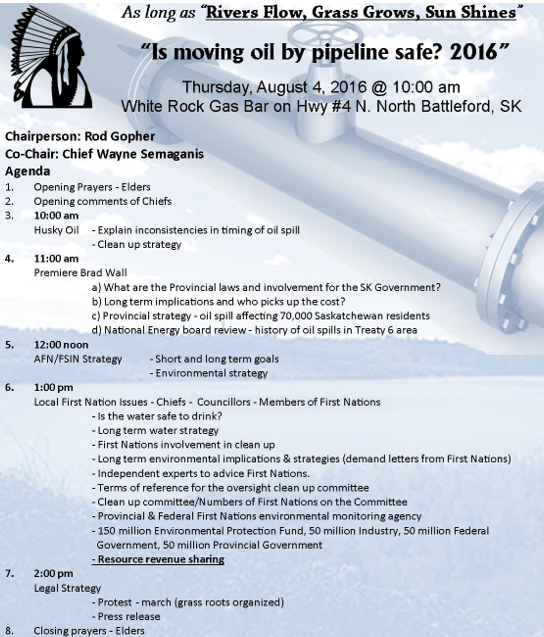 Okie doke. I guess that’s one way of doing it.

I wonder if the Premier is going back for the ‘Resource revenue sharing’ discussion, or the protest-march?

In all seriousness, if this is legit, presumably national media will want to be there, because putting Brad Wall in a room full of people, inclusive of First Nations’ leaders, to talk pipelines and oil spills, is kind of a huge deal.

Updated: Okay now that I’ve had coffee, OF COURSE IT’S AT A GAS STATION.

Perfectly highlighting the hypocrisy of those who drive automobiles but oppose pipelines.

Here’s what is going to happen: analytical results will be released today and they won’t be that bad – heavy oil is not super carcinogenic.

And before I could even type the next sentence, nevermind hit the update on this post… here they are.

Forgive me for wanting to see independent results from a company not liable for millions of dollars on this spill.

Anyway, now that the results are out and the government and Husky have had some time to get their PR-shit together, buckle up and take some Gravol, because the real spin starts today, and will carry over right until Friday.

Updated AGAIN: I was totally right the first time. My initial hunch was that there was no damn way the Premier and Husky would walk into a minefield like this meeting. But then someone who should know told me it was legit, so I figured it was a PR stunt (and it actually would have been a pretty decent PR stunt).

Anyway… CBC Saskatchewan now reporting that the Premier and Husky will not be attending this meeting. Presumably some overzealous organizers figured that if you circulate the flyer, they will come.

The other points still stand though – with the release of these water-testing results, you’ll see an increased damage control effort, and an increased offence initiated by environmental groups.

One thought on “Updated AGAIN: Premier Brad Wall and Husky To Talk Pipelines and Oil Spills On Thursday… At a Gas Station? NOPE – I was right the FIRST TIME”