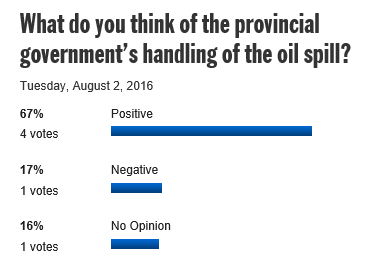 Premier Brad Wall is taking a digital beating, especially on social media, for his response, or perceived lack thereof, to The Husky Oil Spill into the North Saskatchewan River.

I was going to share a sample of it here, but what’s the point, really, beyond giving anonymous, attention-seeking trolls that which they crave most.

Sure, there are some passionate environmentalists who use their own name, even their own photo as a profile picture, who are clearly angry about The Spill and have levelled that anger at Wall – which is fine, because he doesn’t get a free pass from angry opinions. I’d daresay he’s even used to them by now.

What strikes me, though, is the number of individuals, trolls or otherwise, who seem to think this issue will be the downfall of Brad Wall.

You really think that a province in a long-term relationship with a Premier of whom they are still absolutely enamored is going to turf Wall over this?

A province still hoping, praying even, that it will get a second chance at the kind of oil revenues it so very much enjoyed during those heady years between 2007 and 2013ish?

I mean, this is just one example, but like I said, considering the anti-Wall smugness positively radiating out of the social mediasphere, there are certainly many more.

Full disclosure: I really like Brad Wall, as a person and a politician.

I realize it may not seem like it around here, but I do.

Yes, I think he’s got a cabinet comprised of some extremely douchey Ministers, who have to go, and soon.

I think a few of his advisors, tainted by a decade holed up under the Legislative Dome, now have their heads so firmly lodged up their own asses that they’ll never get them out.

And finally, I think management and leadership at Sask Party HQ are almost entirely a bunch of arrogant, entitled assholes.

But I still like Wall, and believe he is a good person.

Who sometimes gets extremely bad advice.

In fact, someone extremely close to the Inner Circle (J**k) (just kidding) (not really) of Power once told me that the number one statement uttered within ICP meetings is “Brad can NOT find out about this”, or some version thereof.

I get the whole notion of Plausible Deniability, but ever notice how the Premier sometimes seems genuinely and sincerely entrenched in a position that seems utterly ludicrous to everyone else who has even a modicum of understanding of the issue?

ANYWAY. I did not mean to write those last four paragraphs, but it seemed like the right time to share that anecdote. Point was that even when I don’t agree with him I still like Wall, so maybe I’m biased when I say that in no world will The Husky Oil Spill take him down.

I don’t think I’m alone in that opinion. Have a look at the results of these surveys, which I grabbed off Saskatchewan media sites in the days after The Spill.

Okay, none of this is scientific, but I would bet my bottom dollar that these results aren’t far off from the reality of public – the offline, non-chattering public – sentiment currently in Saskatchewan.

Make no mistake, Wall’s office, for which he is ultimately responsible, has not done even an adequate job of handling The Spill issue. His communications and crisis strategy in the immediate aftermath appears chaotic and ignorant, almost defiant of the notion that there is, or at least was, a crisis. His tantrum at the media for sharing his initial comments on pipeline safety – the comments he offered up unprompted immediately after The Spill – was petty and beneath him.

Further, the Saskatchewan NDP is doing a pretty good job of being visible on this one.

Oh, and BTW, I find it difficult to believe that Husky’s Not That Bad water-testing results were coincidentally released simultaneously alongside the Premier’s much-anticipated visit to areas impacted by The Spill – a visit which media were allegedly advised of mere minutes in advance.

On or around the same time the Everything’s Basically Fine test results were released.

If Wall’s office and Husky Energy collaborated in any way, shape or form on Wednesday’s media blitz, that is appalling.

(You can see why most would assume I am not a Wall-fan. Again, though, I place these condemnations primarily on the ICJofP.)

Look, if you didn’t like Brad Wall before, The Spill didn’t provide you cause to reconsider that position. If you really didn’t like him, or oil, or resource mining, or some combination thereof, you very likely still feel the same way. And that’s totally fine, underscoring the beauty of Canadian democracy (as long as you’re not being a d**k about it, preferably).

But, go back and have one more look at the poll results I laid out earlier in this post.

Walk up to the Average Jane or Joe on a Saskatchewan street and ask them how they feel about Premier Brad Wall today.

Don’t fool yourself into believing that a Premier who has the approval of a whopping 66 per cent of the province of Saskatchewan is anywhere near having his “political end” thrust upon him.