There’s no doubt changes are coming to the way education is delivered in Saskatchewan.

The status quo isn’t sustainable: funding for K-12 education in Saskatchewan has gone up 170% since 2008, while enrolment has only gone up 7%.

What’s troubling is where that funding has gone, and what’s likely going to happen next.

First, a bit of background on education spending.

The SaskParty often slams the Saskatchewan NDP, especially in Question Period, for closing 52 rural hospitals in the 1990s and 17 rural schools in 2007.

In 2007 the province’s population was dropping, as was K-12 enrolment, particularly in rural schools. In fact, one of the rural schools that closed had an attendance of only 11 students.

Property taxes were also an issue. Saskatchewan ratepayers were funding education to an upwards of 60%. The 2004 Boughen Commission Report revealed that the Saskatchewan government relied more on property taxes to fund education than any other province in Canada. Farmers with large swaths of agricultural land were particularly and unfairly bearing the burden.

This despite the fact that even Premier Wall has said the NDP had no choice.

Wall admitted to the Regina Leader-Post in a 2016 year-end interview that the Romanow government was forced to deal with a significant deficit from the Devine government (which many of the decision-makers in government today worked for).

“It took so long for the Romanow government to get (the budget) back to balance – credit to them that they did.. what they had to do to get there was close those hospitals, shut down schools.- Premier Brad Wall (January 3rd 2017 Regina Leader-Post).

Contrast those recent comments from the Premier to a 2007 pre-election promise made by now three-term Biggar-Sask Valley MLA Randy Weekes:

“If elected, a Saskatchewan Party government would reimburse school boards for the cost of keeping these (rural) schools open, retroactive to this spring to a maximum of $350,000.” – Randy Weekes (June 27 2007, MLA website)

But, all was forgiven as the SaskParty government went on to make significant changes to the way property tax levels were determined, and by who – namely the government, instead of elected school board trustees, and rural Saskatchewan farmers got the break they deserved

And here we are today.

School operations funding has consistently increased since 2007. The Teachers’ pension and benefits account for approximately 15% of the overall budget. Libraries and literacy are the cheapest spend, peaking five years ago. Early Childhood Education and Childcare funding has more than doubled.

A massive injection of capital funding in 2009 (a year which saw spending skyrocket across all Ministries) drove that total to almost a billion dollars since 2006-07, but otherwise has been rather stagnant, until it skyrocketed again in fiscal year 2015-16, aka an election year.

(What’s important to note, however, is the capital funding total does not include the cost of the nine new joint-use P3 schools, which we are renting-to-own over a mysterious number of decades. Mysterious, because the SaskParty won’t tell us how much we’re paying for these schools, for how long, and at what interest rate. But that’s a different post.)

Capital funding in education has popped up as a byelection issue in Saskatoon-Meewasin.

NDP candidate Ryan Meili attempted to generate some publicity by issuing a media release lamenting the state of aging school infrastructure in Saskatoon, and what he says is the SaskParty government’s inaction in addressing the issue.

Premier Brad Wall shot back saying Meili “couldn’t be more wrong, because never have there been the historic level of education infrastructure investments that we have made.”

Wall is not wrong. Regina and Saskatoon schools received about half a billion dollars combined, or just under 50% of all capital funds invested in education in Saskatchewan over the last decade.

Just because you spent a lot of money, doesn’t mean you spent it wisely. 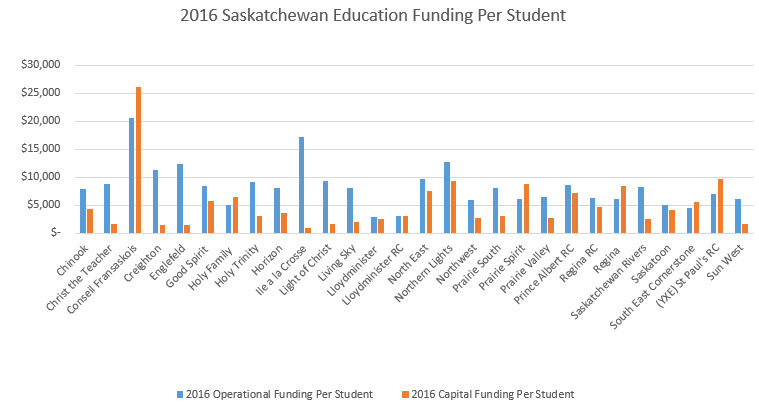 Chart 3. 2016 operations and capital education expenditures on a per student basis.

Saskatoon Public schools placed 13th out of 28 school divisions in receipt of capital funding in 2016, and Regina placed 5th.

Overall capital spending in each school division over the last decade, on a per school basis, paints a similar picture.

Chart 4. Ten years worth of capital investment in each Saskatchewan school division, on a per school basis.

What’s missing from this data is necessity.

The Saskatchewan Provincial Auditor isn’t convinced the Ministry of Education knows either.

In her June 2013 report, the Auditor stated that Saskatchewan had about a $735 million backlog in approved capital projects, and 70% of the 603 school buildings in the province were over 40 years old (Statistics Canada estimates the service life of education buildings at about 40 years old).

Then she concluded that the Ministry “did not have effective capital asset planning processes for facilities to house and support educational programs and instructional services for students in school divisions.”

She made eight recommendations; by 2015 only three had been fully implemented.

One of the Auditor’s recommendations not implemented in 2015 was that “the Ministry of Education develop and use a capital asset strategy that coordinates overall capital needs for schools in the provincial PreKindergarten to Grade 12 system.”

What I do know is that this government cannot keep pointing to the fact they’ve spent a shit-ton of money as evidence that everything is fine, because how they spent each dollar is far more important than how many dollars they spent.

It’s like me going to Superstore and spending $1000 on junk food, Joe Fresh clothing and a new set of casserole dishes. Then, when my kids whine that they’re hungry, I point at the bill and tell them there’s no way, because I just spent a yuuuuuuge pile of cash at the grocery store.

As for operational and capital funding combined (as shown in Chart 3 above), I would expect funding for Saskatchewan students to vary by region, but not this wildly (I know I know – school buses, but seriously, they’re not that much more).

In her 2014 June report, the Saskatchewan auditor flagged some serious issues with the Conseil Fransaskois, stating that it “did not have effective financial management and governance practices.. needs processes to develop required Board competencies.. needs to establish governance and financial policies and procedures necessary to manage its financial operations.”

Also in June 2014, CBC Saskatchewan revealed that the Conseil Fransaskois had warned its teachers they might not get paid. At that time Education Minister Don Morgan called for an audit of their finances and said that while French schools might cost a bit more than average, he felt there was “significant room for them to find economies or do things differently”.

Let’s just say that there’s probably a few million dollars that went to Conseil Fransaskois that could have been put to better use in education elsewhere.

The bottom line is per student K-12 funding in Saskatchewan is illogical and inconsistent, despite an education funding formula released in 2012 to make it more “equitable“.

Since 2011, total enrolment in Saskatchewan’s publicly-funded schools has only gone up 5%, but spending has increased by 40%.

For example, Good Spirit SD, located around Yorkton in east-central Saskatchewan, saw a 78% increase in funding but only a 3% increase in enrolment, and you’ll note from Chart 3 that that increase didn’t bring them up to par – they receive more operations funding than 12 other school divisions, including Saskatoon and Regina.

Chinook SD, which encompasses Swift Current and the surrounding rural areas, enjoyed a 43% funding increase, yet their enrolment went down 3%.

Prairie Spirit SD, which includes Warman and Martensville and rural areas around the borders of Saskatoon, was the only school division since 2011 that has had a higher increase in enrolment than funding. Yet when Prairie Spirit started communicating their financial straits to parents last spring, the provincial government accused the school division of just playing politics.

So with spending all over the map, if changes are coming, where will they be?

Personally, I think Library funding will be frozen, and Early Childhood Education and Childcare funding will take a hit, as will literacy programs, which will be “streamlined” into existing operations.

Of the approximately $1.25 billion in operations funding the Saskatchewan government distributed to school divisions in 2016, about $400 million, or one-third, went to Saskatoon and Regina Public and Catholic School Divisions.

According to their 2015-16 Financial Statements (available on their respective websites), three-quarters of that money, or $300 million, went to pay teachers’ salaries.

See, teachers are hired and paid by their school division. Each school division has a local teachers’ association, which represents the specific needs of its teachers.

Prep time is time (other than recess and lunch) when the teacher is not teaching, or doing anything that involves direct interaction with students during the school day.

Saskatoon and Regina elementary and high school teachers get 20%, or one period (or about one hour) of non-teaching prep time per day – twice as much as rural teachers.

That means that of the $300 million paid to Saskatoon and Regina teachers in salary, $60 million paid for non-teaching time during the school day.

I’m not going to get into the urban vs rural divide between teachers, because I believe that chasm is going to be widened even more over the next couple of pre-2020 election years, but think of it this way: in many Saskatoon and Regina classrooms, one teacher is handling 30 – 50 students. In one high school period, that equals less than two minutes of teaching time for each student. If a city teacher was forced to do that for five periods a day, they’re going to be doing all of their marking and planning at home.

Probably while having a nervous breakdown.

If the Saskatchewan government amalgamates school divisions into fewer, bigger regions, it will kill LINC agreements. If the government then forced urban school teachers to reduce their 20% prep time, equalizing it at 10% across the province, they’d save $30 million.

They’d also exacerbate the divide between teachers within SaskParty’s rural base, many of whom feel city teachers don’t deserve double their prep time, and urban teachers.

By slashing and equalizing prep time, the Ministry of Education would need less teachers to teach the same number of city kids – attractive, I would think, given we’re about to crank open 14 P3 schools in Saskatoon and Regina this fall.

Not so attractive if your kid’s classroom is already overflowing.

BTW, the STF, one of Saskatchewan’s most powerful unions, hasn’t said a peep as we await the announcement on changes to education, which Premier Wall now says will come with the Saskatchewan budget on March 22nd, 2017.

Perhaps they consider potential changes to LINCs as lying outside their jurisdiction.

Or, maybe the STF is perfectly happy to see LINCs dissolved, and that power taken away from local bargaining units, consolidated… and handed to the STF, resulting in centralized power – in different areas, obviously – for both the STF and the Ministry of Education.

There’s no doubt changes are coming to the way education is delivered in Saskatchewan; you can be certain that rural and urban schools will be impacted differently.

For those of you who care, I’m Tammy Robert. I’m a writer, but pay the bills consulting in media and public relations. Email me anytime at tammyrobert@live.ca

I’d love to keep doing it for free, but I have to feed my kids and these posts take forever to write. Your generous contribution makes sure I can keep doing both.

NOTE: I am extremely cognitive of the education funding gap issue between provincially-funded kids and kids attending federally-funded schools on First Nations’ reserves in Saskatchewan. However, I believe that warrants its own post, and now that I have all these numbers organized, I will be writing it. The comparisons will very likely shock and disturb you. But that issue alone will be quite a long post, and it’s too important to tie into this issue, which is as much (or more) about provincial politics, priorities and pandering than it is about quality of education.