This was supposed to have been a post about a scathing expose put together by a massive team of investigative journalists, researchers and educators from across North America.

I mean, at it’s core is an important story – sour gas from oil wells posing serious, even fatal health risks to Saskatchewan residents.

The stories I’m referring to, released earlier this week, were researched and produced by “an unprecedented collaboration of more than 50 journalists and editors from three Canadian media outlets, four journalism schools and a think tank.” There was cross-reporting on the various platforms of the Toronto Star, National Observer and Global News.

For the sake of simplicity and clarity in this post, we’ll call this massive group the “Media Group” or “Group”.

This seemed really odd to me, because the story of sour gas in Saskatchewan was revealed by the Saskatchewan CBC two years ago. It’s not new.

In 2015 investigative reporter Geoff Leo, now widely regarded for his work blowing the GTH story wide open, released an investigative piece revealing the culture of secrecy and risk around the oil industry, the Saskatchewan government and sour gas emissions.

I mean, far be it from me to apologize for the provincial government, but I needed to pause and examine the entire picture, because there’s a huge difference between a bombshell report on a government/oil industry coverup, and a story that may have just felt like such to j-school students and Toronto-based journalists.

In other words, just because they didn’t know about sour gas doesn’t mean we didn’t, or that it’s fair or even accurate to paint this issue as a coverup.

Consider this piece, subtly titled That rotten stench in the air? It’s the smell of deadly gas and secrecy (also a letter-perfect description of my teenaged son’s bedroom). It opens by detailing the story of the Galloways, a family living in southern Saskatchewan whose lives have been greatly and negatively impacted by the oil wells that surround their farm – more specifically, the hydrogen sulphate (H2S), or sour gas, those wells emit.

That is super shitty, and I feel terrible for the Galloways. I’m sure you do as well.

According to the Group’s story:

Ok… but while the Group might have used FOIs and whistleblowers to uncover their “findings”, the Saskatchewan (and beyond) public already knew about them, because the CBC’s 2015 story had all of them, including the tragic and untimely H2S-related death in 2014 of Saskatchewan man Michael Bunz.

Emphasizing that they used FOIs and whistleblowers to write their story suggests the sour gas was a secret or a coverup, essentially confirmed by the story’s next line:

Yet regulatory standards remain largely unchanged and H2S incidents and risks remain hidden from the public.

Here’s a chunk from the Saskatchewan CBC’s decidedly not hidden 2015 story (emphasis mine):

“This is a big and serious problem,” said Ed Dancsok, the assistant deputy minister for the petroleum and natural gas division of the Ministry of the Economy. Dancsok said it’s been caused, in part, by a lack of focus by the industry and the ministry, which is the regulator. “There’s been sites that have not received the attention they should,” Dancsok told CBC’s iTeam. “So our stepped-up enforcement actions are starting to correct that.” Dancsok said Saskatchewan’s sour gas problem is now his “No. 1 priority.”

The Group’s many, many stories, the most concise of which, IMO, is this one, details events going back to 2012. For example, one document obtained by the Group was a map of sour gas hotspots, which was part of an April 2012 PowerPoint presentation by the Saskatchewan government to CAPP.

Sources say ministry staff pushed to make the (map) data public but senior government officials said “there’s no goddamn way that is going to be released.”

And it wasn’t, which is indeed not cool.

But then consider this quote from the provincial government in that 2015 CBC story (which let’s be clear, the Media Group had access to, presuming they ever Googled the words “Saskatchewan sour gas”):

“The Ministry of the Economy said it tested 43 facilities in southeast Saskatchewan that were leaking sour gas “with average concentrations at 30,000 ppm.””

Yeah okay, it’s not a map from a 2012 Powerpoint, but that’s still pretty darn specific, no? Shouldn’t that 2015 subsequent disclosure of regional leaks, even to a different media outlet, still be in the Group’s story?

“…the ministry audited 22 random wells in southeast Saskatchewan in the summer of 2013. “And 21 of them failed,” Dancsok said.”

So if you read this CBC story in 2015 and lived in southeast Saskatchewan, you pretty much knew it was time to buy a hazmat suit.

The Group’s story goes on about communication regarding sour gas between CAPP and the provincial government from 2012 to 2014ish, but does not disclose anything the government said about it to the media or in the Legislature in 2015. Their story references a “secret ministry report” which contains information that appears to match what an official from the same ministry freely stated on the record to CBC. In fact, the CBC story tells the tale of a Saskatchewan family who received a phone call from the ministry warning them of sour gas levels at a nearby oil well site.

After the CBC’s story was released in April of 2015, Minister Bill Boyd was questioned by the NDP in Question Period about the disclosure, or lack thereof, of sour gas. Boyd, as per usual, didn’t have any answers, but this highlights that this issue has been on the radar, even in the Legislature, for over two years. In 2015, subsequent to the CBC story, similar stories on sour gas, including information and quotes from the provincial government, ran in Estevan, the Western Producer, and in a detailed Q&A with Dancsok in Pipeline News a month later.

Here’s my point… I do have one, and it’s not that sour gas isn’t a problem, or that the government of Saskatchewan and the oil industry are transparent and forthright.

My problem is that if you only consumed the Group’s reporting (and initially I was totally guilty of that too), here is what you’ve been led to believe:

The reality is that the sour gas issue, and the shitty communications response, or lack thereof, from the Saskatchewan government, was brought to light by first the Saskatchewan CBC, and then other Saskatchewan media outlets and the provincial NDP, two years ago.

So jacked-up rhetoric like this, from the media and about the media, needs to just calm down:

Because it’s sparking inaccurate mindsets in the Group’s audience, like this:

…instead of keeping the focus on the inadequate (though not “hidden”) information, communications and response from the Saskatchewan government and their corporate funders in the oil industry, as well as the legitimate concerns raised by the Group about whether or not, and where, the numerous sour gas leaks reported to the Saskatchewan government have been recorded, tracked and rectified.

Maybe Patricia Elliot said it best, in response to Leo himself, who finally broke down and Tweeted in response to the breathless praise of the Group’s story: 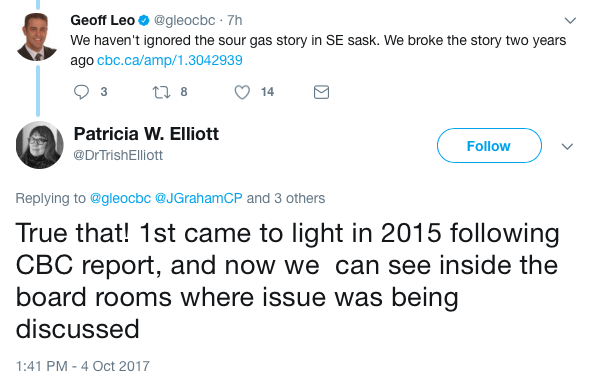 Bingo, Ms Eliott nails it – framing what the Group wrote through the lens, or at least including the lens, of the CBC stories that surfaced in 2015 creates appropriate and fulsome context for the sour gas story.

Instead, the self-promotion of, and emphasis on the journalists and media outlets involved in the Group has hijacked the narrative, in part for some and totally for others, such as the media-consumer/Tweeter I highlighted above.

I’m no journalist, but I’m pretty sure that’s never the goal.

Regardless of what happened between 2012 and 2015, what Saskatchewan residents need to see now is collaborative journalism from this Media Group – or any, for that matter – on whether or not the provincial government did the things it promised it would when this issue became public in 2015.

In the meantime, once you’re done here, read what Postmedia columnist Murray Mandryk wrote here. He totally cuts through the crap and crystallizes what’s really important: the stark contrast between the communications strategy the government uses for any number of other departments (is there a poor poached moose in Saskatchewan that didn’t get its own news release?) and the oil industry. It’s not acceptable, and regardless of how we got here and who brought us, it’s time it’s taken seriously.

For those of you who care, I’m Tammy Robert. I’m a writer, but pay the bills consulting in media and public relations. Email me anytime at tammyrobert@live.ca

I’d love to keep doing it for free, but I have to feed my kids, and these posts take forever to write. By clicking the Donate button below, your generous contribution makes sure I can keep doing both.